I have helped design and develop several games for different purposes such as learning, behavioral shift, cultural awareness and entertainment. This has allowed me to investigate how game design is affected by the intended audience.

The Road to AI Literacy Education: From Pedagogical Needs to Tangible Game Design 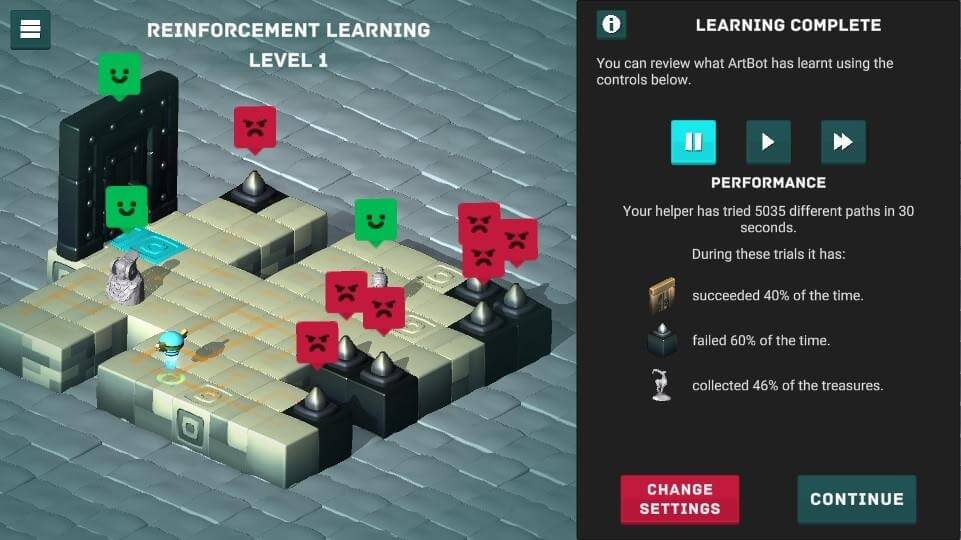 The mini-game in ArtBot that exposes reinforcement learning parameters and reward systems to students.

Abstract: The advancement of artificial intelligence (AI) and its increased use in everyday life have exacerbated the need to understand its underlying processes, and to raise awareness about its shortcomings and faults. Consequently there has been an increased effort to teach basic concepts of AI and machine learning (ML) from an early age. Digital games have been shown to be effective as teaching and learning tools, and there are ongoing efforts to increase AI literacy through educational digital games. To this effect, this work describes the process followed to extrapolate the design of such an educational game directly from the pedagogical needs emerging from stakeholders. Seven focus groups and workshops were conducted in Greece, Malta and Norway, with 55 teachers, researchers, practitioners and policy-makers, and 22 primary and secondary education students in total. These workshops identified seven goals which informed the design of a game for AI literacy called ArtBot. The game design process and the final interface and gameplay loop of ArtBot are explained in relation to these goals. The game was subsequently deployed across a variety of platforms, to enable dissemination to a broad audience in classrooms and elsewhere. The game was part of the tools developed in the framework of the LearnML Erasmus+ project. A preliminary online survey was used to gauge how well the game was received by teachers and students, with an overall positive result. A longer-term data collection of the game usage statistics has been initiated and will be analysed over the course of the game dissemination.

in Proceedings of the European Conference on Games Based Learning, 2021. BibTex 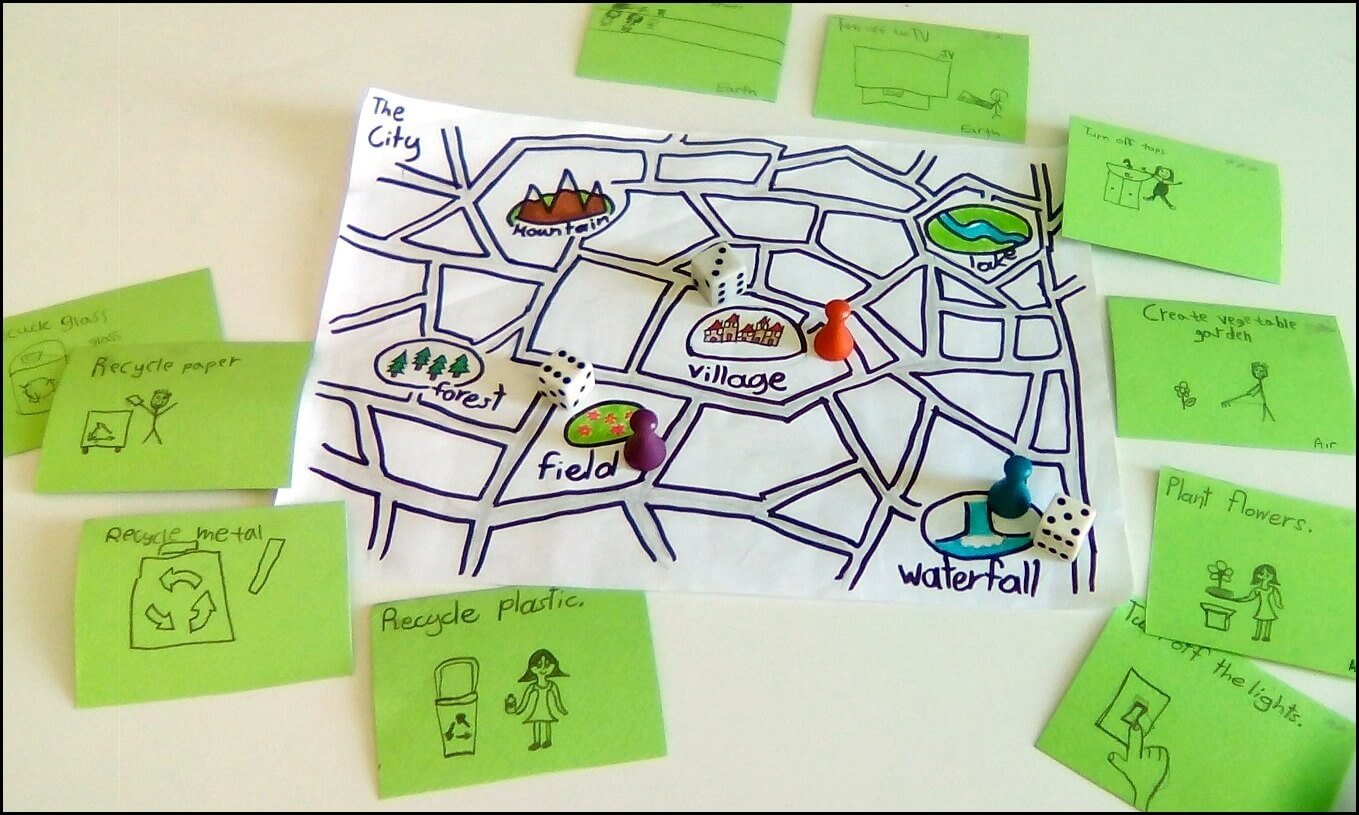 The Newborn World: Guiding Creativity in a Competitive Storytelling Game 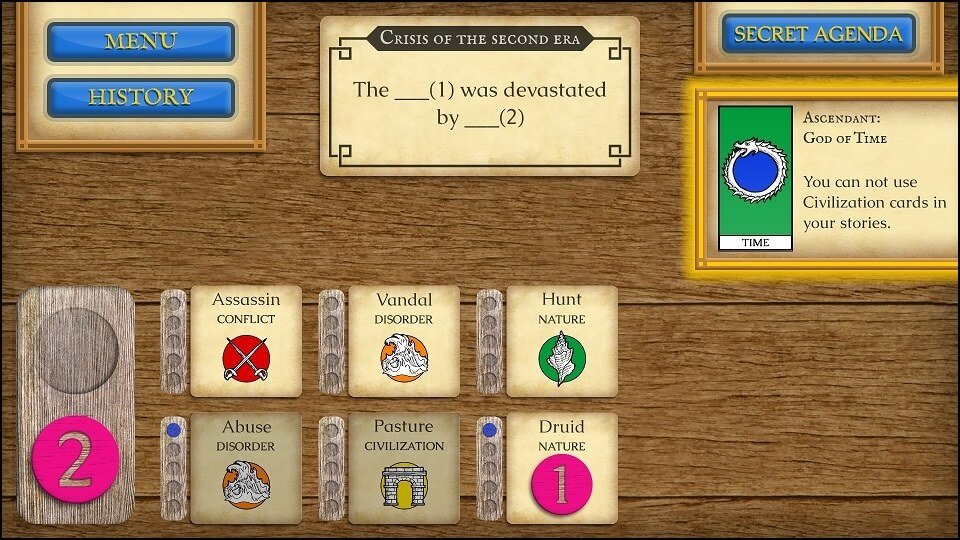 The second player chooses which word cards (bottom) to combine with the event text (top) in order to form their proposed continuation of the story.

Abstract: This paper presents The Newborn World, a co-located multiplayer game for mobile devices with a focus on storytelling. The game has been designed following patterns of analog games that prompt players to tell stories, and uses digital representations of cards and tokens for interaction. The collaborative nature of storytelling is interspersed with competitive elements such as hidden goals and secret voting for best story. The paper exposes several design decisions for balancing goal-oriented and freeform play, competition and collaboration, as well as elements that constrain or foster players' creativity.

Deciphering Generated Symbols as a Game Mechanic: The Design of Alien Transmission

Generated symbols used as cards by the lookout player in the Alien Transmission boardgame, in order to communicate threats and counter-actions to teammates.

Abstract: This article describes the gameplay and the design rationale of the Alien Transmission game, where generated symbols are used as a form of communication between players in a co-operative board game. The symbols are abstract black-and-white blobs, generated by the computer via cellular automata, but players must use these symbols to convey information regarding upcoming threats. As gameplay progresses, symbols gain a meaning due to their visual associations and past gameplay experiences. The work highlights how procedural content generation can be elevated into a mechanic rather than used to randomize the initial game state. 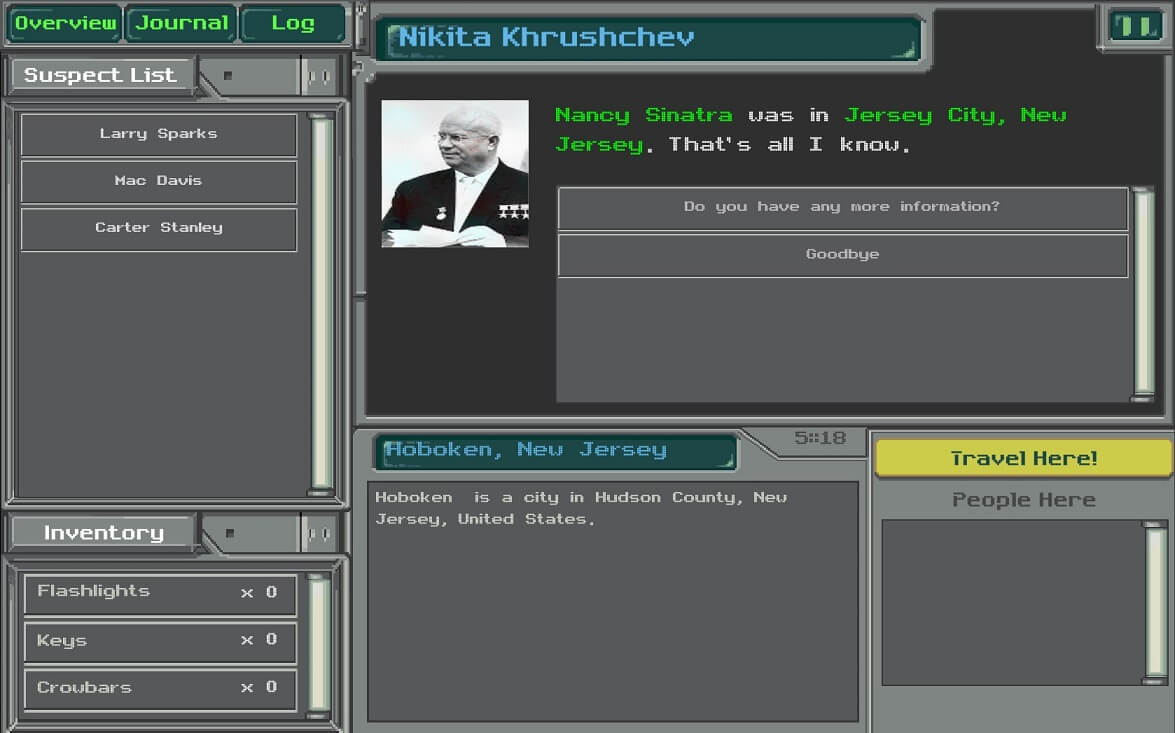 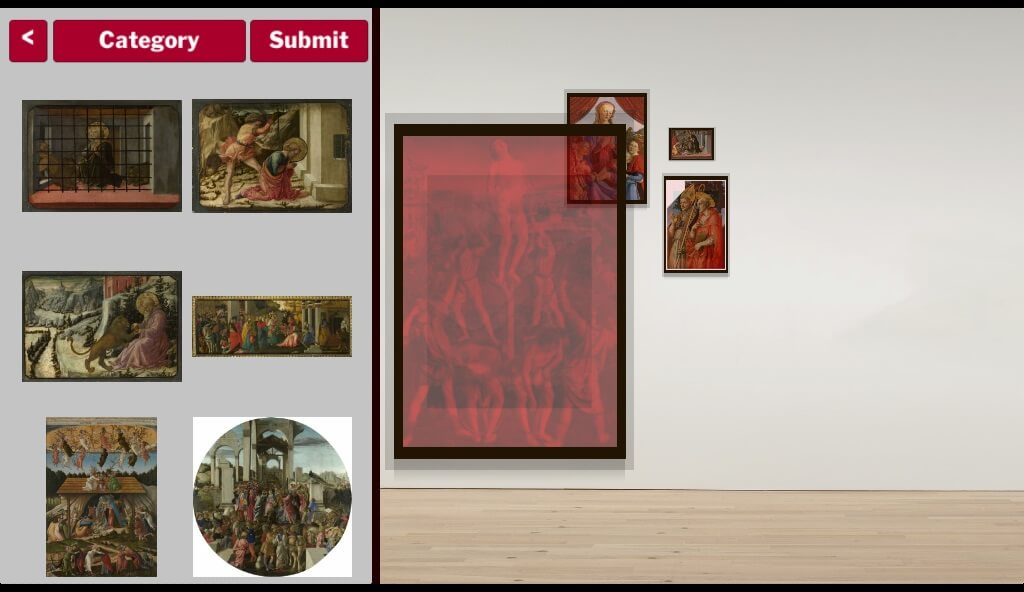 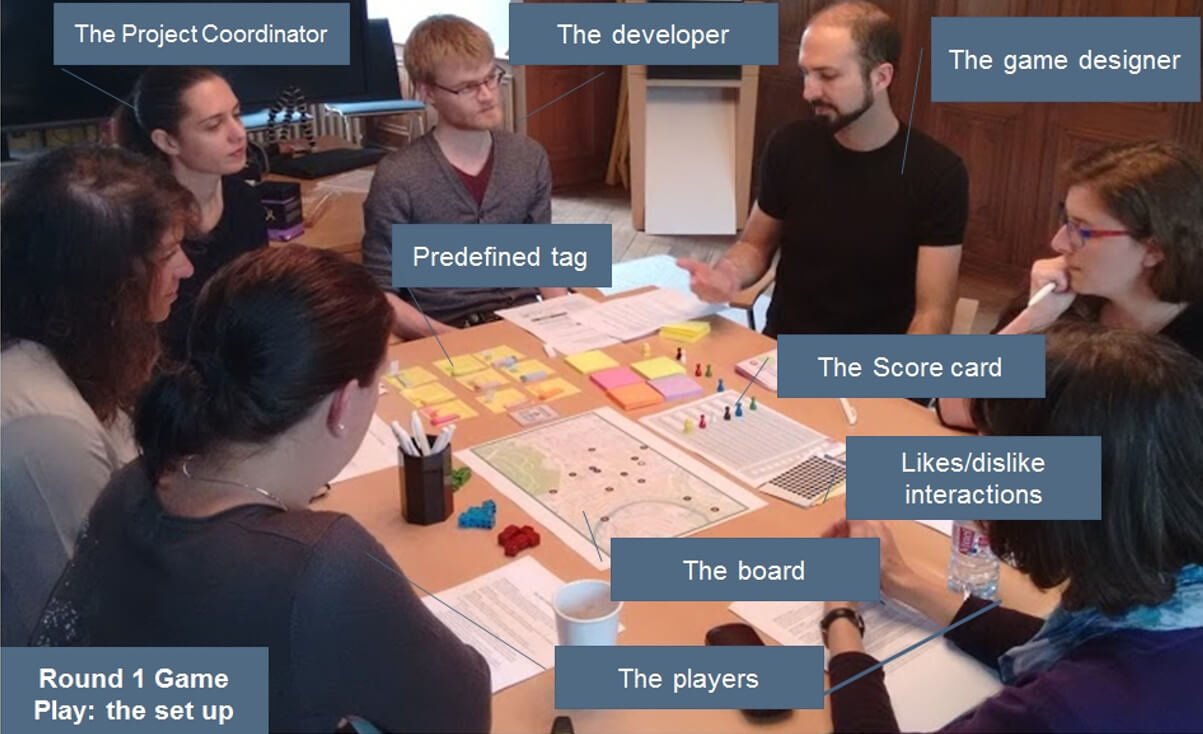 first play test of a board game prototype that partially simulated interactions within a location-based digital game.

Abstract: In this case study we describe the iterative process of paper prototyping, using a board game, to co-design a location-based mobile application. The end goal of the application is to motivate reflection on historical topics about migration. The board game serves to capture the core concerns of this application by simulating movement through the city. Three play tests highlighted the users' interest and issues with the historical content, the way this content is represented, and the players' responses to the interactions and motivating mechanisms of the application. Results show that the board game helped capture important design preferences and problems, ensuring the improvement of our scenario. This feedback can help reduce development effort and implement a future technology prototype closer to the needs of our end users.

In Proceedings of the CHI Conference Extended Abstracts on Human Factors in Computing Systems, 2017. BibTex

MiniDungeons 2: An Experimental Game for Capturing and Modeling Player Decisions 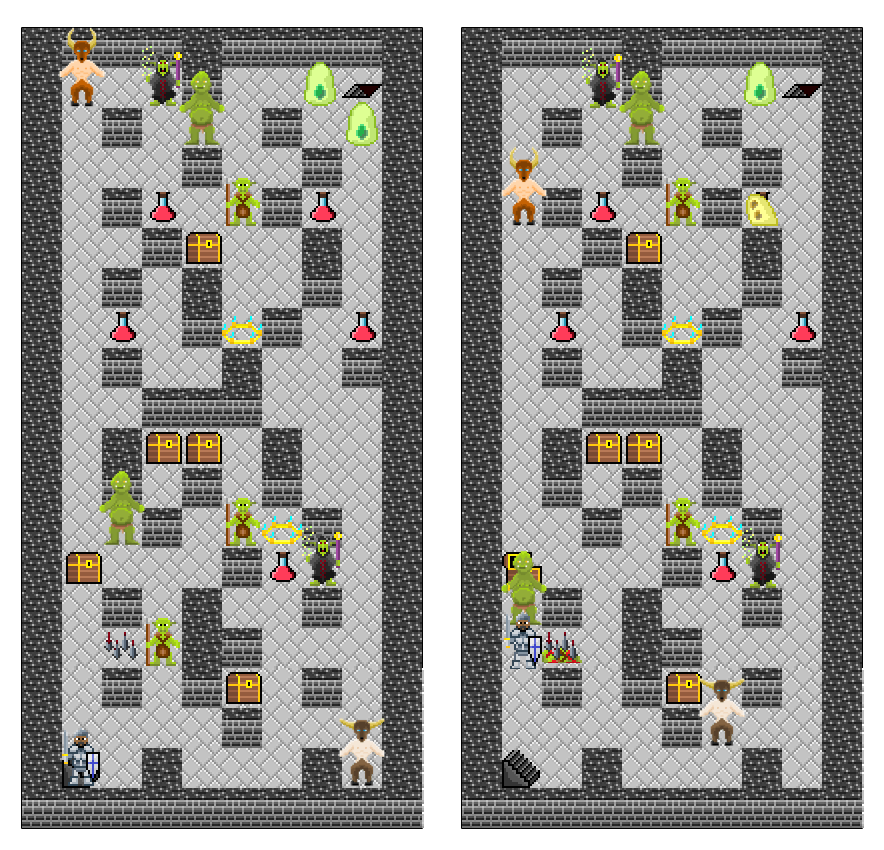 A typical MiniDungeons 2 level at start (left) and after three turns (right).

Abstract: This paper describes MiniDungeons 2 (MD2): a turn-based rogue-like game developed to support research in capturing and modeling player decision making processes through procedural personas and using such models as critics for procedural content generation. MD2 intends to provide a full-circle framework for collecting, modeling, simulating, and producing content for player decision making styles. The fully instrumented and telemetric game will soon be made available to the public to be played on smart-phones for the purpose of collecting as many play traces, representing as many different decision making styles, as possible.

in Proceedings of the 10th Conference on the Foundations of Digital Games. 2015. BibTex